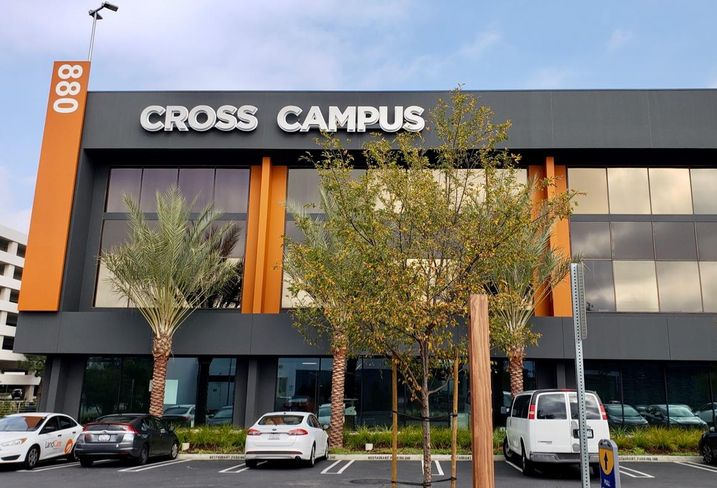 Aiming to be a serious player in the growing flexible office industry, a Southern California-based coworking company has its eyes fixed on rivar with WeWork and Regus. As part of a broader strategy to expand its presence in the western region, the Santa Monica-based Cross Campus, a flexible lowe-backed office and a coworking company, has acquired coworking firm DeskHub.

Cross Campus officials did not disclose the purchase price of San Diego-based DeskHub, which had two locations. As part of the deal, former DeskHub owner Jay Chernikoff will join Cross campus as its marketing director, responsible for marketing the company’s and broker’s alliances.

The two DeskHub locations will be renamed Cross Campus, said Ronen Olshansky, CEO of Cross Campus. “Last year was a phenomenal year for us,” Olshansky said in an interview with Bisnow at cross-campus South Bay coworking center in the second. “We were really focused on growth and getting this platform ready to scale. We went from three places to seven places. ” The purchase brings the total Cross campus locations to seven in two states: California and Arizona, and approximately 220K SF under management.

Cross campus has five facilities in and around the Los Angeles area, and DeskHub adds new coworking locations in Little Italy in San Diego and Scottsdale, Arizona. With the acquisition, the company will now serve about 2,500 members, including individuals, small and medium-sized enterprises, and larger companies. Tenants include Microsoft in Santa Monica, FactSet in downtown Los Angeles and PeerStreet in South Bay.

The growing cross-campus market movement highlights the growing flexible office and coworking market. Although it makes up less than 1.5% of the Los Angeles office market today, flexible office/coworking space is growing in the city. Los Angeles is the second most popular flexible space and coworking Hub nationwide, with flexible space operators taking 3.54 square feet of office space, CBRE reports. New York aligns No. 1 with 9.2 M SF of office space assumed by flex office operators and coworking companies, according to CBRE.

Since 2008, coworking space has grown by 500% in Los Angeles, JLL reports. Nationally, a Newmark Knight Frank study published in December examining the impact of coworking on 24 meters of the U.S. found coworking occupying nearly 50M SF office space or about 1.4% office inventory.

“When you look at the real estate ecosystem and some of the big firms, they’re really getting to the idea that this product, flexible, office experience, isn’t just a niche. It’s not just a fad, ” said Olshansky. It attracts customers from all industries.

There is much more validation now that this could be 20% to 30% of the market a decade from now. Maybe faster. Olshansky said that while the Flex office market is growing, it is also fragmented.

Apart from power players like WeWork, Regus, industrious and summon, there are plenty of small independent operators. Instant Group, a Flex office provider, found that independent operators make up 93% of the nation’s coworking market. Olshansky believes the market is ripe for consolidation in the coming years.

“[The flexible office/coworking market] is not very sophisticated and is becoming increasingly competitive,” he said. “Customers demand more. The market is maturing.” Olshansky said along with the acquisition of DeskHub, this is going to be a great year for Cross campus as it seeks to expand its presence in the western region. Olshansky said the company has just completed a strategic round of investments led by Lowe, and included investors McGuire Builders, continental Development Corp. and an investor union outside Asia.

He said his company is actively looking to acquire two more coworking companies, as it targets an institutional series B round later this year with a goal of $50M raised. “We are looking to be the company that redefines office experience for businesses of all sizes and industries,” Olshansky said. “There is a rather radical change in the way companies are using space not only for work, but for their team’s events and meetings. This is a new model that is more flexible and capital efficient than the leasing structure.

“We think they increasingly benefit from a new environment focused on the experience that contributes to the health and productivity of their workers. We believe we have a platform that will scale and be at the forefront of those changes.” CORRECTION, JAN. 23, 9:40 P.M. PT: an earlier version of this story mistakenly named one of cross campus tenants. The story has been updated.